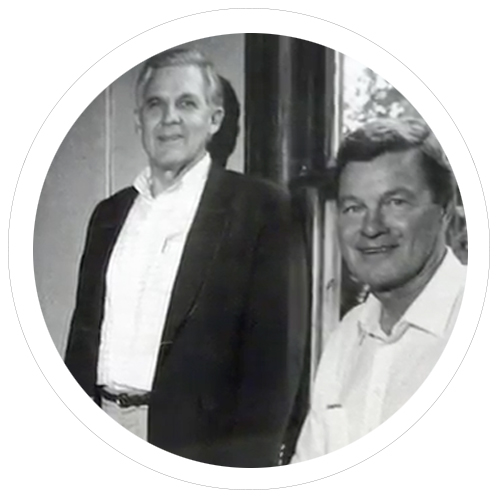 Sam Sibley
Samuel Hale Sibley was born in Atlanta Ga and later attended Georgia Tech before coming to Augusta, GA with the Citizens & Southern Bank. He was later employed with E-Z Go as Sales Manager.

Ever since he won his first golf tournament playing barefooted at the age of 14, his love for the game grew. For the last 25 years, prior to his death in 2006, he could be seen announcing on the 10th tee of the Masters Golf Tournament.

Sam joined University Hospital Alcohol and Drug Unit in Augusta, GA. before starting The Hale Foundation, Inc. in 1990. Sam’s passion for helping men get sober resulted in the fulfillment of his dream to have a place where men could get sober and start to rebuild their lives. The Hale Foundation started with one house located on 5th Street in downtown Augusta through the generosity a friend and has grown today to 5 homes located on Walker Street for our Phase I and II residents and 5 apartments on our Phase III campus.

Sam will best be remembered by his friends and all of the men who came through The Hale Foundation as a man who “lived” to “help” others.

“Hamp” Walker
Hampton James Walker was born, raised and attended school in Nassau County, Fla. He graduated from the Citadel in 1953, where he won the Algernon Sydney Sullivan Award and was Regimental Commander of the Corps of Cadets of the Military College of South Carolina.

After graduating from college, he went into business with his father helping manage a variety of businesses. Mr. Walker was President and CEO of Diamond W. Feeds and Walker Investments and President of Peoples Bank of Hilliard, Florida. In the early 1970’s he moved from Hilliard to Jacksonville, Florida and went into land development and construction where he became President and CEO of Heidi Construction Company.

Mr. Walker was involved with the Greater Jacksonville Open Golf Tournament which later became the Tournament of Championship (TPC). He was chairman of the TPC in 1976.

He was a member of the Honorable Company of Past Chairmen of TPC and a charter member of the Tournament Players Club. He was a founder of Gateway Community Services in Jacksonville and co-founder of the Hale Foundation, Inc. He was also on the board of the Nancy Reagan Foundation. In 1981, Mr. Walker moved to Augusta, Ga. to become President and CEO of Castleberry’s Food Company.